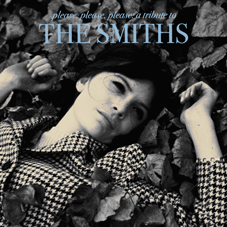 Click the cover to purchase from American Laundromat Records!

An iconic band like the Smiths has to be hard to cover – rabid fans revere the originals so much, it’s a challenge to push past expectations and do something different without being too over the line. Several of the singers on Please Please Please (Telekinesis, notably) even sound eerily similar to Morrissey himself. While the results are pretty, many of the artists on this tribute album seem to be of the “slow it down to a torch song and add some strings” school of cover songs, which doesn’t add much to appreciate besides the voice (which is perfectly lovely in a couple of cases, see I Won’t Share You and There Is A Light That Never Goes Out). Additionally, there are a plethora of Smiths originals that are torchy in their original form (Unloveable, This Night Has Opened My Eyes, and I Know It’s Over to name a few), so it borders on overkill to turn out more songs in this mold. The songs that beg for attention haven’t veered too far afield, but instead add a little twist to the original.

The Rest takes Stop Me If You Think You’ve Heard This One Before to almost Velvet Underground-level arty noise in the instrumental outro (including a very different kind of string “arrangement” than those found on the torchy versions) in stark contrast to the original version’s backdrop of cushy synths. The Marr-like guitar jangling behind the vocals keeps it from being a complete departure from the original, however.

Girl in a Coma (an appropriately named band for a Smiths cover album) takes Rubber Ring to the ragged punky heights at which the original version only hinted. Singing the audio sample from the original (“You are sleeping, you do not want to believe”) is a nice touch. Cinerama is the only adventurous band on Please Please Please to explore the sampling work that the Smiths occasionally did on their originals; the outer space broadcast/talking toy outro on London would make Moz and Co proud.

As noted above, I Know It’s Over, in its original form is quite torchy and tortured, but Elk City turns it into an unexpected indie rock scat-singing meditation. Despite over-emoed vocals, Chikita Violenta’s guitars and almost-dance-music drums on Some Girls Are Bigger Than Others escort the listener out of the Eighties and into the 21st century.

Reel Around the Fountain does the best job of creating something new and enjoyable by immediately catching attention with its bright jangly guitars and Doug Martsch’s almost Michael Stipe-like vocals. Played on the radio today, no one would suspect it’s a 30 year old song.

It’s commendable that the songs on Please Please Please are not simply a list of Smiths hits (Bigmouth Strikes Again, Ask, and Girlfriend in a Coma are some of the bigger songs that aren’t included), but more experiments and fewer new torch songs would have made it more interesting. A strong 3.5 of 5.